Three different cameras, three price points, but it's the Black we want

GoPro was the original action camera manufacturer with their first release back in 2004, primarily developed by Nick Woodman seeking close action captures of his surfing. Since then the company has been on a bit of a rollercoaster with competitors entering the market and other segments adding pressure, such as quality slo-mo videos from the latest smartphones.

GoPro is punching back with the release of its Hero 7 camera. 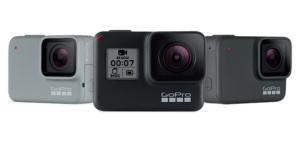 The Hero 7 is available in three different version White ($199), Silver ($299) and Black ($399), with White being the most basic version and Black is the more advanced. The White and Silver feature a more refined version of the older Hero 5 and 6 designs, yet keeping the form factor, making each camera compatible with older GoPro accessories.

They are powered by a less capable processor than the Black (which includes the new GoPro custom GP1 processor to improve image stabilisation) and shoot at 1080p max for the white and 4k for the Silver, but do not have the brand new image stabilisation or include the super slow-motion capability.

The most important camera from this release and the biggest hope in turning GoPro’s fortunes around is the Hero 7 Black which is capable of shooting 4K video and capturing at up to 60 frames per second.

Black includes a SuperPhoto mode which makes the GoPro a better choice for still photos, capable of shooting with HDR, tone-mapping and noise reduction, something that GoPro wasn’t known for in previous cameras (it was all about action video), meaning you can use your GoPro Hero 7 Black to grab stills on the move.

Even more exciting for the Black Hero 7 is the new HyperSmooth feature powered by the GoPro GP1 processor. The camera preempts any swerves and keeps the image free from jerks and jitters. It will offer you Gimbal-type of stabilisation without the need for purchasing commercial-level Gimbal hardware.  GoPro CEO, Nick Woodman, is certain the Hero 7 Black sets a new standard for the industry, telling The Verge that “it sets a new bar, not just for GoPro image quality, but for the entire digital imaging industry. I feel comfortable saying this is the single biggest advancement for GoPro since high definition.”

With HyperSmooth stabilisation you can capture far more than just shooting action, as it enables you to simply walk around with your Hero 7 Black and capture people on the go. Follow people around, capture your kids and much more. We think it would be fantastic as a small device to enable you to capture footage of a wedding, an event and require a versatile camera.

The new time-lapse mode called “TimeWarp” makes it easy to shoot smooth, fast time-lapse videos, even in the same scene.

Finally, you’ll also be able to stream live from your GoPro to your friends online, something which was a difficult process before. All you need to do is use the GoPro app on your phone and click the button, and you can instantly stream to YouTube, Vimeo or Facebook in the matter of a few minutes.

More information about the Hero 7 White, Silver and Black can be obtained from the GoPro website..