Moves you away from tracking steps and feeling sad about not reaching 10,000 each day

Smartwatches are very much still in demand right now, although the jury is still out on whether they actually make us fitter or not by wearing them, this has not stopped the health tracking/wearables industry from absolutely booming to become a behemoth and it is predicted to continue to surge and it will reach $48.2 billion by the year 2023.

Google is one of the tech giants involved in the wearables industry and has recently made changes to their Google Fit app in order to keep up with everyone else, and even take a different tone.

As with similar apps, Google intends to gamify healthy activities such as competitive games as we want to beat our friends or brag about how well we’re doing. To achieve this, the metrics focus on ‘Move Minutes’ and ‘Heart Points’ – which Google developed alongside the American Heart Association, which moves us away from steps and towards just exercising. 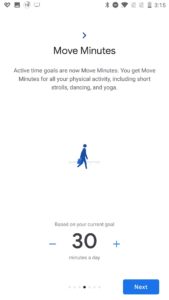 Move Minutes will track whenever you are active

Once you get started you need to enter your information such as weight, height, age and gender. You will then track these key metrics as you exercise. Move Minutes will track whenever you are active, and Google Fit encourages you to gain these minutes by doing small things throughout the day which increases the minutes you gain, such as walking with a friend, rather than simply sitting down for a coffee. The Heart Points are awarded when you increase the intensity of your workout, so a walk would garner one point and an intense run or activity would garner you two points.

Two decreasing rings reflect your Move Minutes and Heart Points and once you reach your goals they animate to show completion. Below the rings you see step count, calories, and a calculation of distance covered. You can then move to the Journal tab, and it takes notes on how many minutes and points were earned on each day. On top of all this, there is a plus-shaped toast icon which you can tap to add blood pressure, weight and activity or begin to track your workout if you want.

The app is also featured on Wear OS, which is used to link to your Android smartwatch, but surprisingly it is not downloaded as much as the Fitbit or the Samsung Health app. With this new redesign and rethink in conjunction with the American Heart Association, Google hopes to catch up and take the lead on the health tracking.