Using prints from four of the most famous Bond films

Over the years guys have watched the James Bond films with a shade of envy. What’s not to like? An action hero dishing out justice, remaining super-cool, while saving the world.

So far, there have been 26 Bond films based on Ian Fleming’s novels, with many having passing referenes to men’s swimwear. The most famous scene, from Casino Royale, had Daniel Craig walking out of the ocean with a tight pair of trunks. In Skyfall, again with Daniel Craig, a pool scene had 007 sporting a pair of Orlebar Brown “Sky” Setter’s, which helped elevate the brand. Now you can relive some of the classic films with a pair of shorts as part of the limited Orlebar Brown x 007 capsule collection.

The collection is being released in the Bulldog style, the most popular mid-leg short, and will feature prints from Dr. No, Thunderball, You Only Live Twice and Live and Let Die.

All four shorts use imagery from posters created to promote each film. The ‘Dr. No’ features the iconic beach scene featuring Sean Connery. The ‘Thunderball’ shorts feature Sean Connery’s underwater action scenes. For ‘You Only Live Twice’, the shorts show James Bond piloting the autogyro while being chased by Spectre helicopters. Finally, for ‘Live and Let Die’ the shorts feature the film’s most memorable chase scene which shows Bond using a speedboat to evade Dr. Kananga and his men. Funnily enough, the world record for speedboat jumps was accidentally set during this scene with a jump of 110 feet.

Introducing the four shorts from the capsule collection: 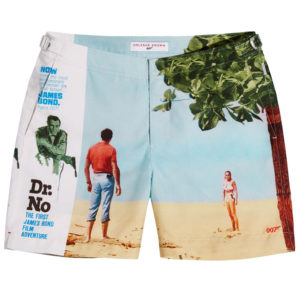 Released in 1962, Dr. No was one of the first 007 films that introduced the iconic elements you now expect to find in every Bond film, including the famous theme tune.

This iconic beach scene from the first Bond film Dr. No is sure to inspire you to seek similar sunny adventures. The print used on these shorts was used in cinema’s to promote the film. 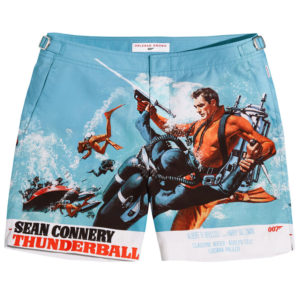 Although Thunderball was supposed to be the first Bond film, it ended up being the fourth release due to initial legal issues with the original novel which required resolving.

This illustration from the Thunderball film poster features Sean Connery as Bond fighting off a SPECTRE agent. These underwater action scenes contributed to the film winning an Oscar for Best Visual Effects. 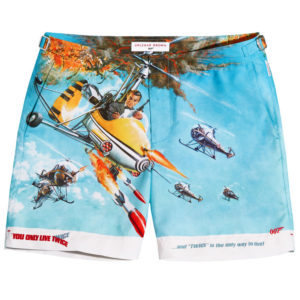 The fifth film in the series and the last before Sean Connery retired (temporarily) from the brand.

The artwork used on this short depicts a stylised Bond coolly piloting an autogyro while being pursued by SPECTRE helicopters for a striking pair of shorts. In typical style, he appears cool, calm and collected—so much so that his hands aren’t even touching the steering. 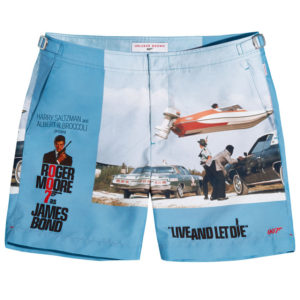 Released in 1973, Live and Let Die was the eighth in the range and was supposed to feature Sean Connery, but he refused to return, so producer’s switched to Roger Moore.