You are at:Home»Fashion»Orlebar Brown launch their Autumn Winter 2017 collection
Fashion

If you’re situated in the Northern hemisphere, you may have noticed it’s slowly becoming cooler, nights are pulling in and it’s taking longer for the sun to rise on a morning. It’s officially Autumn.

If you travel in October to find late Summer sun, you will not be surprised to find the hotter locations (we’re thinking Greece, Cyprus here) will require a pullover on the cooler evening.

With this mind, it’s the time of the year when clothing brands announce and release their Autumn/Winter collection. It’s worth adding that many of the key Orlebar Brown AW17 pieces were made available through the Summer period, so don’t be alarmed if you purchased one of these items already.

Orlebar Brown has made their full range available and the theme envisages the fading summer sun, gentling lending into the sky, with warm autumnal hues, cast across the gentle sea. The palette for AW17 is sharpened by hazard orange, contrasted against ice and cinder, all inspired by the clouds and early morning mist.

Take a look at the AW17 video for more inspiration before our highlights.

Highlights this season include the lightweight Merino wool knits, including the fantastic Lucas pullover. The Whitely waffle knit can be layered over an OB-T or worn on its own, perhaps with a pair of Bulldog’s. We love the Barthmann Bulldog print, whilst the Larson shoe is now available in various colours such as Anthracite/Hazard Orange.

Below are our four Orlebar Brown Autumn/Winter 2017 highlights. 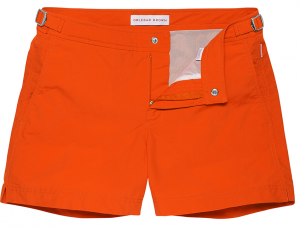 Although the Bulldog is the most popular Orlebar Brown style, we prefer the Setter as it’s universal with it’s 5″ inseam, making it perfect for sitting around the pool, the bar, lunch with friends or a stroll around town.

Hazard Orange is a repeat colour (it’s been available in a previous season), but it’s also a stunning contrast against the other darker AW17 colours. Try mixing it up with a grey OB-T, for example. 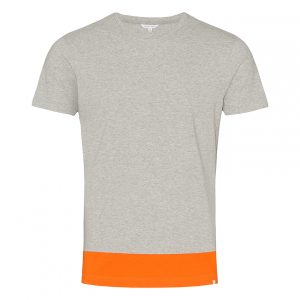 Using a thicker soft cotton than you’ll find in the OB-T, the Sammy is the perfect t-shirt for the cooler Autumn months.

The Sammy has a classic fit, so you might want to try dropping down a size if you want a more tailored t-shirt.

This combination of Cinder (mid-grey) and Hazard Orange makes for a superb contrast. Try wearing this with a dark grey Ebony or Fossil OB Setter or Bulldog. 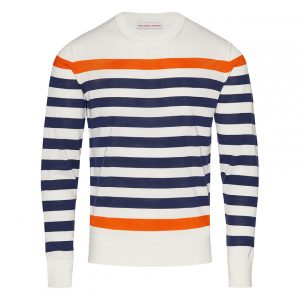 This is a soft and relatively lightweight Merino knit and, oddly, writing about this pullover whilst wearing it – which is a first. It’s not a pullover you’d layer, so you’d wear it on a cool Autumnal evening. It also comes up smaller than your usual Orlebar Brown pullover, so move up a size where possible.

The Lucas is available in various shades, but this Cloud (off-white)/Navy/Hazard stripe is another powerful combination. 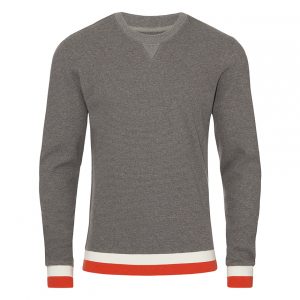 We’d go as far as saying that Orlebar Brown has nailed the sweat with the Whiteley Waffle. Arguably one of our favourite pieces across all collections. The Whiteley is a lightweight waffle sweat top which can be worn over a t-shirt or on its own.

We will warn you: you can shrink these waffle knits in the wash, so wash on a very cool temperature! Or move up a size and then wash.

Fossil is mid-grey and the sweat is contrasted with the superb off-white/orange stripe.

Head over to the Orlebar Brown website to view the complete collection.