High Summer is a celebration of sunshine, travel, happiness and good times

Think of High Summer and we all have varying but similar memories: long warm evenings, casual drinks by the pool, loose clothing and plenty of time spent outdoors. Traditionally High Summer covers the period from late Spring through to early Autumn and for clothing manufacturers, June through August for us consumers.

Orlebar Brown, the British resort wear company, has released its High Summer 2017 collection and, so far, we think this is one of their strongest releases. We’re always proud to admit that the original Short Motivation inspiration stemmed from the strong bright shades from Orlebar Brown’s Spring Summer 2012 release, and we’re pleased High Summer 2017 references our favourite collection.

Celebrating a 10th anniversary, Orlebar Brown expect this to be their strongest year yet and, if our sneak preview of the next three collections is anything to go by, we can certainly testify that we agree: this will be a powerful year for the brand. There’s plenty of interesting pieces with this and the forthcoming collections and we’ll share those with you in the future. Watch this space.

So, what was the inspiration for High Summer 2017? Orlebar Brown explained to us that they started by referencing the David Hockney’s ‘Bigger Splash’ painting, which was also the original starting point for the brand when Adam Brown was working on his vision in 2005 (Orlebar Brown launched 2007). Hockney’s 1960’s Los Angeles wardrobe resulted in two segments. The ‘Hockney Brights’ include palette including sunshine yellow, lawn green and three different blues. An ‘Englishman Abroad’ was the second segment, which is the ready-to-wear collection of lightweight linens, relaxed shirts and clashing stripes.

The official Orlebar Brown High Summer 2017 video, below, will offer an indication of the colours you can expect from this collection:

For the regular OB Edition, as part of this collection, Orlebar Brown has partnered with Sandra Anderson, for three different prints that reflect a modernist poolside environment. Society photographer Slim Aarons has applied his touch to three different swim short prints.

Lastly, there’s a strong emphasis on sport with High Summer 2017. The Jack sport short, which is our new staple at Short Motivation, was released shortly after Spring Summer 2017 in February, but is a strong component of the current collection. Combine the short with new favourites such as the Bryan sweat top, Karson hooded sweat jersey and one of the rash guards if you’re hitting the water.

We were lucky to have an early preview of High Summer 2017 and picked a four key looks from the collection: 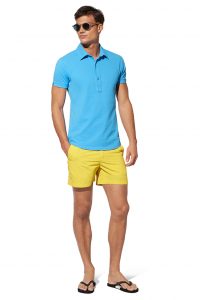 The Hockney Brights have our attention this season. We love the Raspberry, Sunshine, Lawn and Bluejay shorts, tee’s and polos. Our advice is to mix up the colours and be bold. 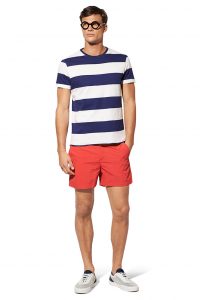 Sammy block stripe t-shirt with Bulldog Cotton Twill shorts in Raspberry, along with another Short Motivation favourite, the Larson in white. The Sammy block stripe is a classic t-shirt, so if you prefer something closer fitting, it might be wise to go down a size.

The Larson is Orlebar Brown’s “shoe you can swim in”, but we’ve found the key benefit of this shoe is it’s extremely lightweight and comfortable, adding almost no weight to your luggage. Ideal for a weekend in the sun. 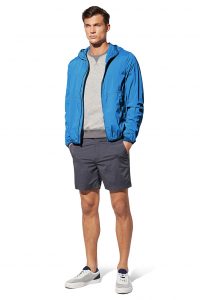 The Orson jacket in Maritime, Bryan sweat in light grey melange, Jack sports short in ebony, plus the Larson in white. The Orson is a lightweight hooded jacket, ideal for an unpredictable Summer’s evening.

The Jack is one of our favourite Orlebar Brown pieces and you’ll see it used widely across the Short Motivation social media. It’s Bulldog length with 6” inseam, designed to wear for sports. Think boating, yachting, training at the gym, a run in the park. But, it’s also ideal for the pool with its quick-drying lightweight material.

The Bryan is a classic fit loopback sweat with a melange effect and vintage style. 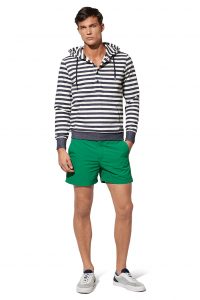 Tierney hooded sweatshirt, Bulldog in Lawn and Larson in white. The Tierney is a brand new piece with a cool Californian vibe. A loopback sweat, with a four-button closure and drawstring neck. The Bulldog is as before, but in a bright mid-green.

At Short Motivation, we tend to wear the Setter (with its 4.5” inseam) as our go-to Orlebar Brown short, but the Bulldog is the most popular swim short, used as the basis for the Bulldog Cotton Twill short and the style used for the printed swim shorts.

Have you bought or used any Orlebar Brown products? Bought a piece from the High Summer 2017 collection? If so, what do you think of the range? Let us know your thoughts in the comments section below.