When we think of Miami, our first thought is a party lifestyle, beautiful beaches, palm trees, expensive hotels, an extravagant world, perhaps – but this is primarily South Beach (SoBe), which most people regard as ‘Miami’. Few people consider real Miami, located in what the locals would regard as downtown. Although, Miami beach was revived in the 1950’s as a definition of glamour – the other parts didn’t follow. Until now.

It’s strange to think how far Miami has come over the last 20 years. Although South Beach was an area frequented by the likes of Frank Sinatra in the 1960s, after the 70s Miami fell away, drifting in to a no-go area more like we remember in the 80s hit Miami Vice than what it’s like today. When the Delano re-opened in 1994, with an all-white design by Philippe Starck, the tide became to turn. Miami is now a very different place and we can’t get enough of the district.

Here at Short Motivation we’ve travelled to South Beach various times, but on this most recent trip we decided to explorer the wider area, so this article will cover the usual destinations in South Beach (SoBe) but also other attractive parts on the up such as downtown/Brickell area and the super-hip Wynwood. 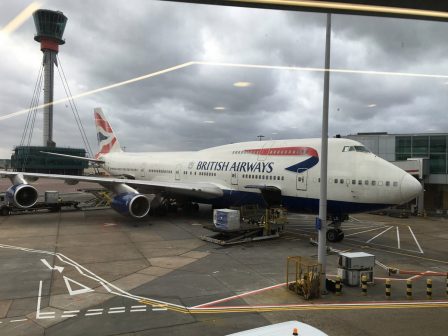 Travelling back from Miami it was the 747, still, can’t complain… 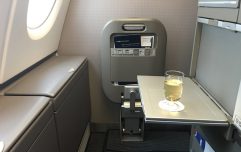 A welcome champagne on the new BA 380 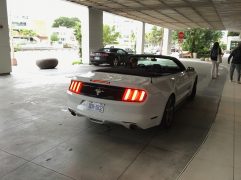 Getting out and about in Miami is relatively straightforward. Although we hired a car (parking, despite what other reviewers have said, is fairly easy to find), getting an Uber is super-easy in the Miami area. You can hire an Uber and be in downtown in under twenty minutes. And, when you’re bored, simply stand on the street and you’ll be picked up for the return journey. One word of advice though, if you’re driving in Miami, try and avoid the highways at rush hour. We found were always stuck in a jam, primarily due to the erratic traffic and constant crashes (they really do over and undertake in Miami: be warned).

After a pleasant flight on the new British Airways double-decker A380, we made our way to relatively new The Edition, which opened in 2016. A beautiful hotel with a retro feel, juxtapositioned with a party vibe. The entrance lobby is huge and white with gold pillars featuring a pool table. Being fitness-focussed at Short Motivation, we were especially pleased to note the rather large gym in the basement, along with an ice rink and bowling alley. 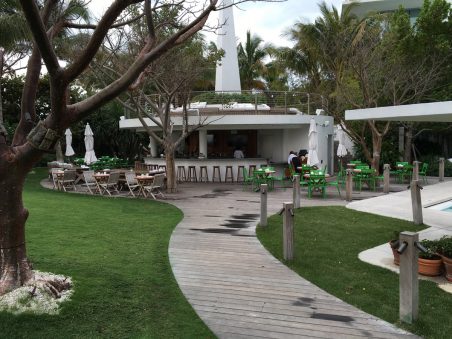 The Edition outside bar area 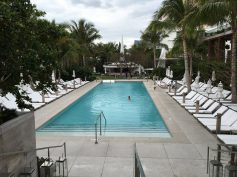 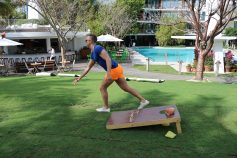 Ball games at The Edition 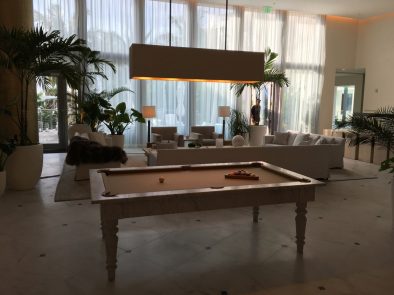 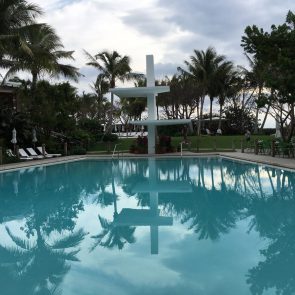 Our favourite pool – the “bungalow” pool

There is a huge restaurant named Market which features cakes, breakfast and dinner. Breakfast, as is mostly the case in the States, was superb. The rooms are large and comfortable and there is a great outdoor area which features swimming pools, games and several bars.

We spent time at The Edition in the two large pools, playing a few ball games and much more, before it was time to move on – we arrived late, sadly.

Although we admired The Edition, our next stop was to our favourite hotel on SoBe: 1 Hotel. The 1 Hotel is a huge, sprawling, luxury hotel designed with planet earth in mind. The hotel has an incredible and very welcoming cedar wood scent as soon as you enter and throughout your stay, from the recycled and repurposed wood used for chairs, preserved moss, tree branches, and more repurposed wood for lighting providing the most relaxed atmosphere during your stay. 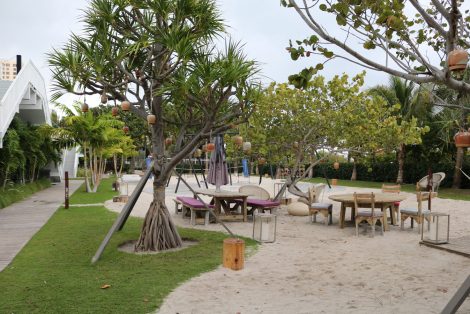 The 1 Hotel volleyball and outside beach area 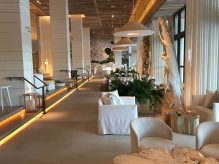 One of the outdoor heated pools (one of four) 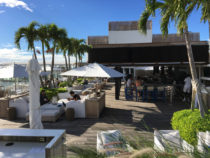 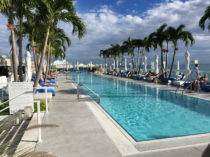 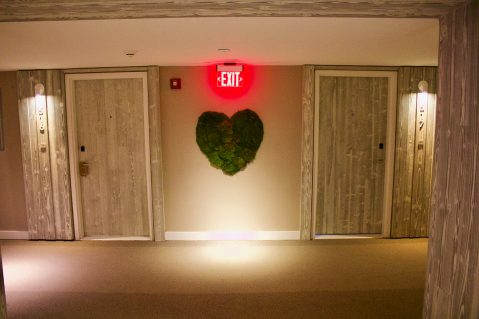 1 Hotel love – inside the hotel corridor 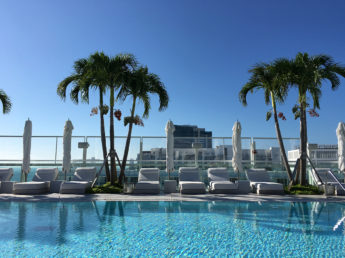 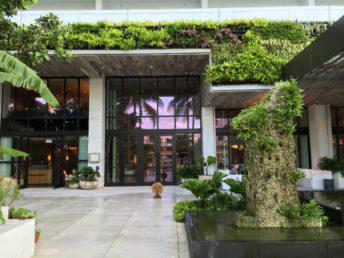 The commitment to sustainability is on display throughout the hotel, with comfortable rooms with refillable cedarwood toiletries, hangers made from recycled maps, books and even love letters. The hotel has a Tom Colicchio restaurant named ‘Beachcraft’ which has delicious dinners, breakfast and lunch, albeit a bit pricey. There is also a great steak restaurant named ‘STK’. There are a plethora of pools outdoors, volleyball net, table tennis and a state-of-the-art 14,000 square foot Spartan gym being built* (*opened December 2016 – see our Spartan gym news!). A brand new spa was due to open after our last visit, too.

As this was our third visit to South Beach, we wanted to get out and away from the area and two standout locations are really worth emphasising: Brickell Village and Wynwood. Brickell village is a new development in the downtown area which was dominated by offices. There is ongoing development for new condos, apartments and lofts. It plays host to a wide range of upscale bars, coffee shops and restaurants. The huge Brickell centre was recently completed and it’s completely revolutionised the area.

Since we last visited, there’s been quite a few hotel openings in the Brickell area, too. One standout for us is EAST Miami, which we intend to visit in the near future. Keep an eye on Short Motivation for more information. 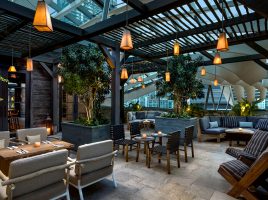 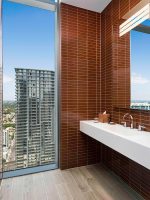 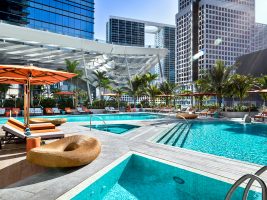 One of the best coffee shops in the Brickell area is Eternity Roasters. It isn’t as prominent in Miami as Panther Coffee but we prefer the vibe. It is a small intimate place, with its own roastery in the front window. The coffees are always served to perfection by friendly staff. We highly recommend the “gibraltar” if you’re ever there! For an incredible downtown eating experience Marion restaurant always hits the spot. A specialist seafood restaurant, with amazing raw bar platters for you and your close ones to enjoy. There are excellent options if you do not like seafood such as a delicious suckling chicken to share. It’s safe to say we’ve been back to Marion on a number of occasions and never been disappointed. Once we went for lunch and dinner in the same day (unplanned, but pleasant nonetheless). 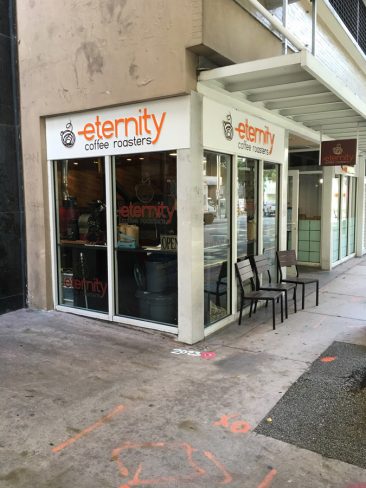 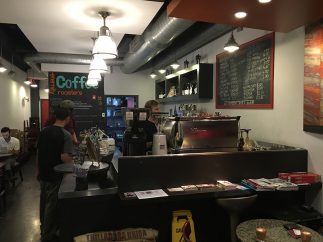 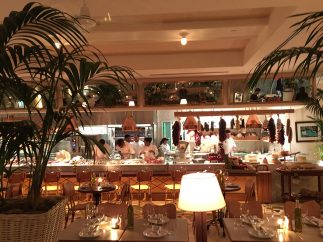 Marion. We can’t really how good this restaurant was, on many levels

For a more hip experience outside of SoBe and Brickell, Wynwood has it all, billed as Miami’s art centre it hosts, cool and still upcoming independent shops, small eateries, gourmet restaurants and great bars. Some of our favourites include the Salty Donut – a great pop-up donut shop with a permanent shop opening soon, it has great varieties of donuts. Open Friday to Sunday 11-6 but usually sells out before this so try and get there early!

For some comfort food and decent drinks head to the Wynwood Diner, serving up treats such as meat loaf and has a nice outdoor area to enjoy the Miami weather when it is playing nice! Finally, one of our favourites is Alter. It’s in a hard-to-find warehouse on 23rd street with an open view kitchen. In stark contrast is the food – a very bare menu with brief descriptions – these are usually served as part of a 5/7 dish chef tasting course. While the plates seem small even if you are having the 5 dish course you will still feel fairly satisfied at the end! While it seems like a hipster joint, it really should be considered one of Miami’s top restaurants

After a short but very welcome stay at 1 Hotel SBE, which is our goto hotel for South Beach, we moved to the SLS. We have rather mixed feelings about this hotel. It could be great, but unless you’re a huge party animal, be prepared. We found the noise to be incredible if you’re on the pool-side of the hotel, especially on a weekend. Indeed, the second pool – the best pool – is shut off from hotel guests from Thursday to Sunday and is either invite-only or, worse, as a hotel guest you can only gain entry if you’re prepared to match the minimum $200/day bill spend.

But, the hotel looks amazing. All-white rooms, superb restaurant, and a completely different atmosphere on non-party days. Indeed, the bonus of being an SLS guest is you can go and use the other hotels within their group, including The Raleigh, with its famous 1940s art deco pool, and The Redbury, which is a much more modern hotel, situated across the road. 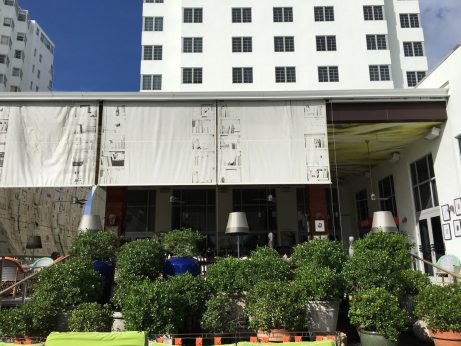 The rear of the SLS South Beach 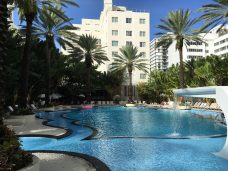 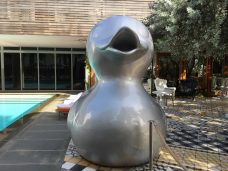 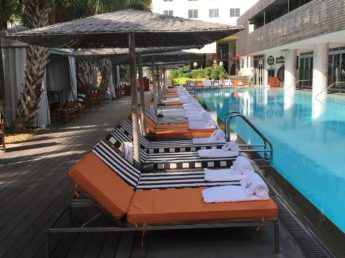 It was a quiet weekday at the SLS 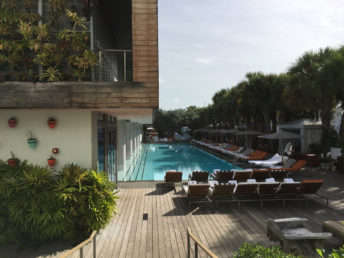 Now the downtown Miami Design District is fully open, we could’t resist a visit. Go on a weekday, later in the day and it’s deserted. There’s a flagship Tom Ford, plus various boutiques from the likes of Fendi. Best of all, if you a car, parking is easy.

There’s plenty to recommend in South Beach itself. For instance, Panther Coffee was our go-to coffee shop whilst we were in the area. But it was always packed. For a gym, we secure a day pass at Anatomy at 2020 and were bowled over with the facilities – well worth a visit if you want to hit the gym on your trip.

Walking distance from 1 Hotel SBE, we’d recommend the Klima restaurant. On both our visits, we were welcomed, met by friendly staff, served well, ate great food and had a more than pleasant experience at this restaurant. 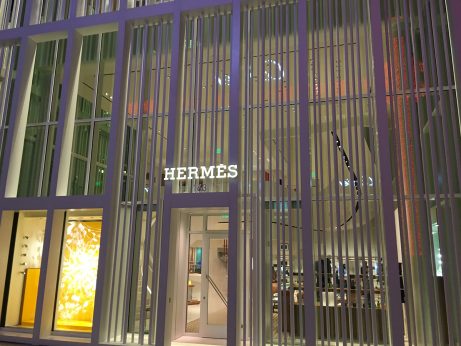 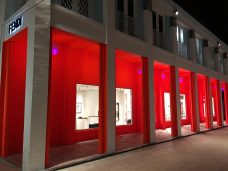 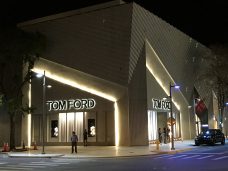 All in all, we’d always recommend South Beach – we’ve been four times in 2 years. But, with all the changes happening in Brickell, in particular, on our next trip we know what we’re going to do – we’re booking downtown Miami and we’re staying away from the crowds, in a different atmosphere, mixing it up the locals. We’ll guarantee you a far better and more realistic experience than you’ll find on South Beach (and it’s a cheaper option, too).

Have you been to South Beach? Did you get to downtown Miami? Have you been recently and seen the changes in Brickell? Give us your opinions in the comments section below.