You are at:Home»Travel»Navigate the NYC subway more smoothly with crowd-sourced app, Pigeon
Travel

A few years ago we decided to rely on technology, spend a little longer in our London hotel, waiting for a notification from our tube-tracking app to tell us when the next train would arrive to get back to Paddington Station. The app enabled you to see real-time updates of the train location as it made its way around the underground. Or so it claimed.

Problem was, turned out that it this real-time train status was simply a ‘live map’ using assumptions based on when a train was due to leave a station. It offered the impression that your train would be close to your station, thus offering you far more time your hotel rather than standing in Kensington tube station. When we arrived at that the station, there was no train displayed, ended up running late and questioned where they’d received their data.

Google Maps offers a reasonable way of figuring when a train is likely to arrive based on information provided by the MTA who provide information based on delays to a train, so Maps can offer this information through the app.

There is still potential for better data and, taking a cue from Waze, which is a traffic app which provides information based on crowd-sourcing data such as hazards you can expect on your route, whether there’s police on the way, speed traps and the status of moving traffic. 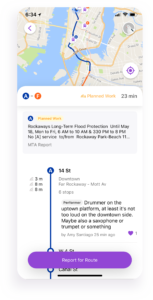 Pigeon is a brand new app from Google’s Area 120 development company which will is designed to offer immediate real-time information about the status of both your train and network, enabling you to make decisions if a train is delayed or a line becomes blocked, whilst you are at the station. But, it goes even further. As it’s crowd-sourced, expect information about the train itself, including if the train is packed, why it might have been delayed and much more.

Of course, you still get the basic navigational data you’d find in Google Maps. Before you set off on your journey, simply add your intended destination and Pigeon will plot the best route based on current disruption. You can check against arrival times, too, making sure you know what time you’re likely to arrive based on the route you want to take. You also get live train movement updates, too.

It’s worth adding that Pigeon is currently in test mode and the New York developers are using the local subway network to determine the usefulness before Google decide on its future direction. Further subways may be added in the future or the data might eventually be completely migrated to Google Maps (which would be handy as how many apps do we need to plan and track our journey) or Waze.

Download Pigeon, but note it’s iOS-only whilst in its testing stage.