You are at:Home»Travel»Flying to the States has never been this cheap. BA and AA launch ‘Basic’ economy flights
Travel

Flying to the States has never been this cheap. BA and AA launch ‘Basic’ economy flights

Flying to the States can be a bit of a mixed bag. Depending who you land behind or how quickly you get to immigration, it can take an age to get through before you collect your bags, and that’s after you avoid laughing when you’re quizzed, often in detail, about why you are visiting the country in the first place.

With this in mind, it’s good to travel with a sense of style, knowing what will hit you on arrival, especially if you’re flying to Los Angeles or San Francisco. If we have spare Avios, we often use these to upgrade to Business Class if possible, but the flight across to Boston or New York is relatively short and there are a number of new options to get you over as cheaply as possible.

Norwegian has had a lot of press recently and, here at Short Motivation, we’re big fans of the service. However, healthy competition makes other airlines take note and respond accordingly and IAG, the group which controls both American Airlines and British Airways, has announced a new ‘Basic’ economy service, which is cheaper than the regular economy option.

Available to purchase from April, the big difference between ‘Basic’ and regular economy is you do not get any checked baggage and you cannot select your seat. In our eyes, most people who travel to the States will need to take more than cabin luggage, unless you’re travelling for an important business meeting in New York and intend to return within 48 hours. But, then, would you really fly ‘Basic’ economy for an important business meeting?

Not being able to choose a seat is more of an issue if you’re booking as a family. You might find your seats are allocated in different areas of the plane. The good news is, the ‘Basic’ economy seat is no different from regular economy once you’re onboard, so you still receive a meal and other services you’d expect. 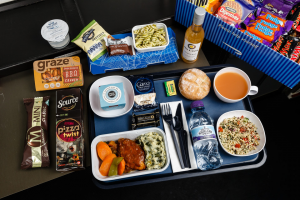 The British Airways long-haul economy meal is receiving an overhaul, with a number of ‘tuck-box’ options if you get hungry

British Airways recently announced improvements to their World Economy long-haul catering, including flights to the United States. Economy customers can expect to receive Pretzels served with a welcome drink, the main meal will include four courses, a bread roll and bottle of water,  A second meal will be served on longer flights or a snack on shorter long-haul destinations. In addition, a tuck-box is available on longer flights, for when economy flyers get hungry, including Dairy Milk buttons, Mini Chedders and other snacks.

It’s worth adding that the Icelandic WOW air has also announced discounted flights New York’s JFK, from London’s Stanstead Airport, starting at £139.99 one-way. There aren’t many seats at this price as this is a launch deal running between April and June 2018. Flights commence from 27 April.