You are at:Home»Travel»Google Flights will now tell you if your flight will be delayed and includes hidden costs
Travel

There a wide number of flight search tools, with some claiming they aggregate other engines to give you the best price options. But it’s not just about the price you see and pay. We want more information about the flight itself.

Google Flights has suddenly become quite interesting. In addition to showing you the various price options for a flight search, you’re now presented with computerised calculated data on whether the flight you book could be delayed.

Why do delays happen? Flight routes are based around the availability of an incoming flight and some routes can be affected by where the plane has flown previously. As an example, we’ve found an early morning flight from London to Cyprus is likely to be on time as the plane will have flown in overnight and prepped for the morning. The same route later in the day either will rely on the incoming plane flying back from Cyprus or from a different route entirely and, by mid-afternoon, is more likely to be delayed.

Google’s information is based on historical data. Flight information is catalogued and Google simply refers to this previous information to determine whether your searched flight is likely to be delayed – you can then make a decision on whether to book or select an earlier flight. Google claims they will only list potential delays when they are at least 80% confident of their information.

In addition, search for an economy flight on other search engines and you’ll see a discounted price and quickly pull the trigger. But, you always know what’s included within this price. As an example, airlines in the United States now offer a ‘Basic Economy’ option which is a class lower than regular economy. You might not be able to take a single bag on the plane, might board last and could not have any access to the overhead bins.

With this in mind, Google Flights will now inform you if a displayed economy flight is a basic economy option and will try and warn if the price requires you to pay additional fees for cabin baggage and other basics. 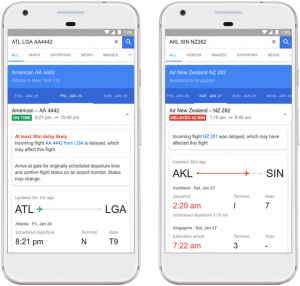 Google Flights will show if your flight is likely to be delayed, whether it’s basic economy and other hidden charges

Previously, Google added price tracking to their Flights system, enabling you to quickly the best time to commit to a hotel booking, again based on historical data. For instance, Google will warn you if your hotel is likely to be cheaper on an alternative day or whether the price is likely to drop in the future, closer to your booking date.

Of course, you still receive all the other flight search benefits. You can drill down and add a connection option when searching for the best value flight.  You can even choose the location of your connection. Google Flights will warn you if you pick a date or time which is more expensive than an alternative option and will offer the chance to swap flights.

The biggest downside for us is that there’s no iOS or Android app. But, the Google Flights interface is designed to be very mobile friendly, so as long as you have an internet connection, simply point your browser to https://flights.google.com.