You are at:Home»Travel»Why we love flying with Southwest Airlines
Travel

Why we love flying with Southwest Airlines

Flying budget, if we’re brutally honest, isn’t always the most pleasant of experiences. Across Europe, most budget flights are short, so it’s a case of getting on the plane, grin and bearing the flight, knowing you’ll soon be at your destination.

In the States, even a short flight can easily be 3 hours or longer and we’ve often been on a flight where you see no service whatsoever.  Flying Delta between New York to Palm Springs, in 2016, a flight which would border on being defined as ‘long haul’ in Europe, we were served nothing more than a few biscuit snacks and a soft drink. In First Class. Yes, First Class. Astonishing.

We’ve flown most carriers in the States and Southwest Airlines make flying a pleasure. We’ve never had a poor Southwest experience and it’s the simple things that make a big difference. Although a budget airline, with Southwest, you can check-in a couple of suitcases into the hold, without charge. You can take a further bag into the cabin and we’ve even seen people take in a small suitcase and laptop bag, without complaint from the cabin crew.

The experience doesn’t stop there. The cabin crew go out of their way to entertain you with their announcements, have a very positive demeanour and will even serve you snacks, soft drinks and a basic alcoholic drink, even on short flights. You are often given a top up, too, if it’s a slightly longer flight. You could even compare this service to the same Delta “First Class” service we received on the aforementioned 7-hour flight. 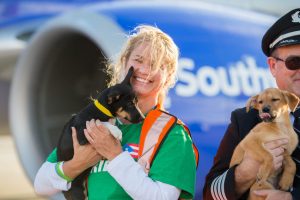 It’s worth adding that Southwest Airlines get you on the plane in a completely different manner to other airlines.  When you check-in, you’re allocated a position in line, rather than a seat on the plane. If you check-in early, you’ll be one of the first to board. Leave it late and you could be one of the last. If you’re one of the last, you can easily find yourself squeezing between two people in the middle seat and not being able to put your bag in the cabin. Worse, check two people in and they might not be able to sit together. You have been warned! We’d recommend adding the Southwest “Earlybird” check-in option to your booking as it offers you early boarding if you remember to check-in early.

Everything Southwest Airlines seem to do is aimed at making life just that little bit better. Even their news is upbeat, such as their dog rescue effort in San Juan. No wonder Southwest are regularly featured in the FORTUNE Top 100 most admired companies.

With domestic flights across the States, we’d have no hestitation in recommending Southwest and adding that maybe some of the other airlines, Europe included, should take note.