You are at:Home»Training»Advice»Training: Perfect Your Push-up
Advice

Pity the poor push-up. Used as a punishment in PE classes and the military, less sexy than a thousand more complicated exercises available in the modern gym, and done with terrible form by almost everyone, it’s perhaps the most underrated exercise on the planet. Because done right, the humble press-up is one of the best full-body moves possible: as well as building the chest and triceps, it builds core strength, shoulder stability and the coordination for more complex moves. And done with minor variations, it’s the best upper-body muscle builder that you can do with exactly zero kit.

Time to make sure you’re pressing up properly.

Basics first. Whatever else you’ve been told, a proper press-up starts with your feet fairly close together, body in a straight line, and your arms locked out. Your hands can be directly under your shoulders or slightly outside of them, but your elbows, when you drop, should stay as tucked to your sides as possible: it keeps the strain on your triceps and off your rotator cuffs. 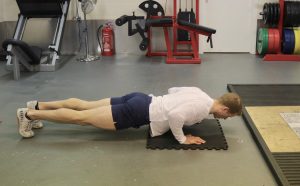 Lower yourself until your chest touches the ground

Next, you’ll lower yourself until your chest touches the ground (but, ideally, not your thighs), then press back up, body still straight, and pause briefly at the top before dropping into the next rep. Doing 20 or 30 of these in a row is a far superior goal to cranking out 50 half-rep press-ups: they’re better for building strength, have more transfer to other activities and keep your body in balance. If you can only manage a handful, chop your ‘maximum’ number in half and do the resulting number on the minute, every minute, for 10 minutes: repeat once or twice a week and try to nudge your numbers up.

Done right, the humble press-up is one of the best full-body moves possible

Can’t do a single rep? Work on it with ‘negatives’ – lowering slowly and then dropping to your knees to press back up

Can’t do a single rep? Work on it with ‘negatives’ – lowering slowly and then dropping to your knees to press back up – or change the angle by putting your hands on a wall, table or sofa. Alternatively, throw in a few sets throughout your day: before you get in the shower, say, or while you’re waiting for the kettle to boil. Whatever you’re doing, remember to keep your core braced throughout: it’s an abs exercise as much as an arms one.

Once you’ve reached a respectable number of reps – let’s say 10 in a single set – it’s time to innovate. To give your chest muscles an extra nudge, make your press-ups into ‘squeezers’ – do them as normal, but at the top, pause for three or four seconds as you try to ‘pull’ your hands towards each other (they shouldn’t actually move off the floor). Your pectoral muscles’ main job is to bring your arms in towards your chest, so this move brings them into play much more than the old up-down, with less stress on your shoulders than the wide-grip press-up favoured by some trainers.

Use the ‘hand release’ variation: at the bottom of each rep, take your hands off the floor,

Alternatively, use the ‘hand release’ variation: at the bottom of each rep, take your hands off the floor, pull your shoulders back, then bring your hands back down and press yourself up. These make sure every rep starts from a dead stop – eliminating the stretch reflex that helps out during ‘normal’ press-ups – and gives you slightly more range of motion in each rep. Do them fast to build power or slow to build muscle – but keep the rest of your body rigid throughout.

It’s tempting to ignore press-ups because they feel like a warmup, but your body doesn’t know where resistance is coming from: all it knows is how hard it needs to work. Do your press-ups properly, and find ways to add resistance, and you can use them to build muscle whatever your current level of strength, and wherever you go.

Joel is a Short Motivation fitness contributor. He's the Editor-At Large at the UK "Men's Fitness" magazine, plus he produces his own blog: www.livehard.co.uk